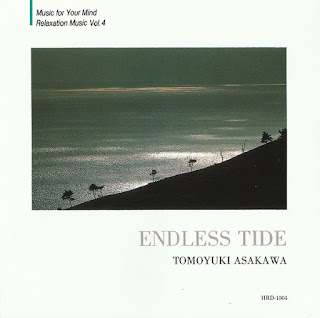 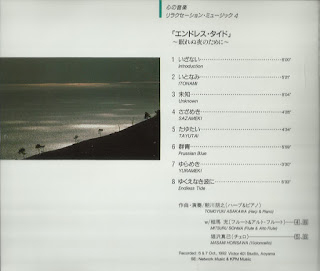 If water is an adhesive, this is the one you want.  Endless Tide is gushing, dripping drenched in harp.  Like, you want the biggest pancake in the universe to sop all this up.  Surprisingly straight forward in its appearance and good to listen to at lower volumes, this album proves a resilient attitude as effortless as the waters of Tao.

This goes on for a while.  This is the main A section.  A subtle #11 gets thrown into the E major 13 later on.  Tomo builds the sweeping patterns, splashes into Bb major 13 somehow, then takes off into Debussy celestials, doing that ascending Debussy pretty thing.
There’s a brief Eb major 13 pause, a quick tunnel of secondary dominant chords…swoop back to Bb maj 13 to reset and act as nothing ever happened on B maj 13 again, now we’re back to the beginning.
Somewhere in there he hits a GNARLY B7alt (sumthin like B G D# F# D), SOMETHING remotely like that.
In the back to the beginning A section again instead of one E major 13, he lands E MINOR MAJOR 7, THAT is cool.  Typical IV minor chord but with such a grit into it, OOFA, beautiful.
More Debussy, 2ndary dominants…then surfs on a progression of B min maj 13, B maj 13.  Flops between the two for a bit, finally lets us off easy on the B major 13 ending.
Song is structured as A B A B C ????  A section would be the B and E major stuff.  B section would be the Debussy ascending and 2ndary dominant stuff.  Repeat A B again, then C section is the Bmaj13 to B minor major 13?  Something like this

We are greeted with a lap-sy Wave waving to us.  The water almost sounds goopy.  And we slowly sink (but we can hold our breath!), and we sift slowly to the bottom of the ocean.  Snell's Window lights up the Aquascape.  As we get deeper, the splashing of the waves fades away, distill.  Eventually, we consorm inside the heavy depths of ocean bliss.  Pleasantly, bluely.  Drifting past rocky coral, the colors of autumn.
The harp is soppy, dripping wet with molasses.  Deliciously, articulately syrupy.  Every now and then a beautiful ghastly dom7 chord spooks up.  Probably with an altered 9 and some 13.
At the end, waves welcome us back.
I am visualizing a digital beach and wave image in ASCII with an all black background and neon light colors.  Like that Legowelt album, “Vampire Goes West”.

Song title means, “Life”, the harp is played with a zesty vigor.  Note the melody is played between a higher and a lower voice…could reference male and female broad way style duo?  Like Aladin and Jasmine singing together!
Itonami is like a broadway Disney style song; just imagine the melody being sung by Ariel or Belle.   The ascending chord progress also contributes to this broadway style.  There is a prominent melody happening here.
Song ends with V7 I, then goes off into I major ideas arping off of the banks.  Love the altered dominant chords that pop up, this is a theme!
We are left washed up on the shore, a rapid tide washes us awake.

The beginning Harp riff is D to Eb, then goes to Bb to B.  Eventually a Bmajor voicing happens, a sharp one then Bb major triad.  And then we’re off to swirlsville.  In swirlsville towards the end, plays a sweep based off Ebmajor to Ebminor.  We’ve seen a bit of that so far in this album.  Another sweepy part is Bb 7 based, probs mixolydian.  Most of this album is pivoting around Bbmajor so far.
Some use of the Japanese minor scale GOMEN I forget its official name.  The one that’s C, Db, F, G, Bb…koto sounding stuff!
And how mysterious it is!  IIRC, like Bjork’s “Cover Me”.  Obviously, the weird scale contributes to the mystique.  Love the snakes that run up the right side.  Bioluminescent slithers run amok.
Serpents morph into Majestics.  Shows everyone and anyone has the potential for karmic reform.  Chinese fireworks paint the water torn sky.  Wow the Majestics intersect with the beginning theme, weird scale comes back into play.  It’s some type of minor scale, but with lots of b2 and b6, like some Japanese scales.  This is just my speculation though.  Further analysis will show which scale it is.
I think this song is themed with the same angular dream harp sandwiching a new section every time.  Form:  A  B  A  C  A  D  A  D  A  C          -Where A starts and always comes back after a new section.

Riff is something like C E G A B C.  Based around C major scale with no D or F.
At some point we see B-7 , E7, A-7, D7.  Two-five’s happening.
We wind up in Eb major for a little.  There’s a funny suspend on a Gmajor..that transitions into the C major main arpeggio riff.
The large suspended ending sounds like a D-7 to D-13 funky sus thing going on.  Like if Santana ripps on D-7 G7.
One online translator says, “Din” or “Noise”.  Another suggests the title means, “Awake”.  It certainly sounds spirited and bright, like a delightful Sunday morning.  Somewhere between crisp and summer glow.  We are awaking from the Unknown, ignorance, samsara; we are becoming enlightened.
Parts of this song seem pastoral, on a Miyazaki grassy field, with a simple farm and a few cows.

Lots of D major 9 stuff, pretty pretty.
IT’S SO CLASSICAL I CANT KEEP UP WITH THE SPEEDY CHORD PROGRESSIONS
“Tayutai” has some translations as, “To flutter, to waiver”.  I’m uncertain about that association.  Does seem somewhat lilting though.  Being passed about with the wind, in a gentle play.  Maybe it sounds more anxious and less innocent than that at first.
Lots of low voiced, surprise minor chords in the harmony.  Lots of low voices in general.  Later in the song use of low MAJOR chord voicings, sounded very romantic.
Is this the first song of the album that introduced a new instrument?  Before this the songs seemed solo instrumental, mostly harp.  This song introduces the STRINGS (idk, cello maybe?) and a RL piano.

Ab minor, mebbe harmonic minor sometimes.  Then sometimes Eb minor.
This title is significant!  Hokusai, the 17th and 18th century Japanese painter, went through a period where he outlined all his paintings in Prussian Blue, before painting them in (And instead of the traditional black ink).  A painting with blue in it was considered high class, because of the rarity of the ingredients to make the blue pigment.  IDK why Tomoyuki Asakawa named this song after that color.  Maybe to do with the deepness of the instruments, the boldness of the sounds.  Strange, we are back to the normal, lone, gorgeous harp.
Middle progression bit sounds like a 90’s emo rock progression!

MIXOLYDIAN w00t w00t!  Very much like Eno’s album with Laraaji…Ambient 3: Day of Radiance, it is called.  This song is so active, LOTS OF SWAYING TO DO LOL.  By now, I’ve lost the water theme.  I no longer hear of Endless Tide.  Seems drier.  I have no musical analysis for this except that THE POWER OF RADIANCE IS WITH YOU

8.  ゆくえなき夜に – Seemingly being the title track, “Endless Tide”
D major based.
Has a HEAVY BASS THEME, weird.  Like a bossa nova bass, turning into a chord where the 1st note of the bass line doesn’t match up with the 1st note of the chord.  UGH, ex:  The bass plays C, G, where we expect the resolve to Cmajor as the I chord.  Instead what happens is the major resolve is on the G chord, so it tricks our ears.  He plays some Budd, again, Pavilion of Dreams...similar voicings to the mid-later parts of that song.  They’re probably both in the same key.
This song is a culmination of every instrument on the entire album, yea?  When the strings come in partway through the song, it sounds like Brave Fencer Musashi and/or anime.  So cool.  II-9, III-9 progressions seem to do that.
Ends like a typical orchestral awesomeness, LOW resounding root note to fade out.  Lovely J.

-“Endless Tide” is reminiscent of some Debussy and also of Budd’s, “Pavillion of Dreams”.
-Hear lots of the altered dominant chord!  Sounds like a similar type of voicing is used each time, no matter which song.

-This album is very classically themed.  The song forms are seldom repetitious; they’re live through, like watching a film.

-While it is FUN to listen to good music LOUDLY, this album sounds SPECTACULAR on a low volume (vol. 12/100 right now).  Tomoyuki Asakawa could have intended his album to be listened at a lower volume.  Thinking further on this, makes total sense.  People enjoy the sound of ocean waves when they’re moderately far away.  This album’s theme is about waves, tides, oceany stuff.  The waves crashing at a LOUD volume is HORRENDOUS.

Endless Tide pushes through peacefully at low volumes.  An albumastic adventure for when you want something as film making as classical music.


Posted by MattandtheJays at 6:04 PM

MattandtheJays
MattandtheJays shares the inner workings and meditations of wonderful music, as well as thoughts on haiku and colorful doodles.
If you have an analysis request feel free to ask ! If interested in any art pieces, they can be mailed to you ! Each piece is unique and one of a kind, made with oil pastels and highly erasable. Some pictures are oil paints.. Most pieces are either index card or bookmark sized.
Enjoy your time here